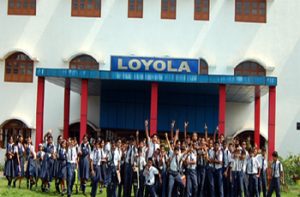 LOYOLA School, Bilaspur, was established in July 2005 and is conducted by the members of the Society of Jesus, commonly known as Jesuits. The Society of Jesus, a Roman Catholic Religious Order Founded by St. Ignatius of Loyola in 1540, has been active in the field of education throughout the world since its foundation. The Society of Jesus in India is providing quality educational service to the nation reaching out to all age groups of the people. It is managing number of primary, secondary and higher secondary schools, colleges, universities and institutes of higher learning, technical schools, institutes of business and rural management, institutes of media and communications, etc. where millions of young people of both sexes belonging to every class, community and religious groups are being educated, “The visible face of the church and the society in India is educated.”These institutions are part of the Catholic Church’s effort to share in the country’s educational undertaking. This effort, while particularly responsible to the Christian community, has always been at the service of the whole nation.

In these institutions, recognized as Christian minority institutions, the religious beliefs of all students are treated with respect, students learn to value inter-religious collaboration and acquire basic understanding of respect for the faith, vision of the members of the diverse religious communities, while deepening their own response to God Jesuit education is Inspired by the vision of man drawn from the life and teaching of Jesus Christ, who symbolizes love and forgiveness of God, who lives in solidarity with all who suffer and pour out his life in the services of others for the total and integral liberation of human person leading to participation in the life of God himself. Jesuit education is also based on the principles of character formation elaborated by St. Ignatius of Loyola. “While it respects the integrity of academic disciplines, then concern of Jesuit education is preparation for life…….Jesuit education is also concerned with the ways in which students will make use of their formation within the human community in the service of others.

‘The goal of Jesuit education in today’s understanding of Ignatian world view is not to prepare socio-economic elite but rather to educate leaders in service.’ (The characteristic of Jesuit Education # 37, 110) Jesuit education system is a failure if the student moves out from its institution “without having grown in his sense of the divine reverence of the sacred, respect for human life, compassion for the poor, concern for justice, awareness of oppressive social structure and commitment to help build a more just and more human community ” (Fr. Peter-Hans Kolvenbach SJ, Superior General of the Society of Jesus) This vision and the principles of character formation give Jesuit institutions a specific character and set before their staff and students the sense of divine, the ideals of humanism and service towards which they are invited continually to strive.